... THE INTERNET. As some of you might know I am off on my gap year travels in January. In the run up to my departure, and to continue as I travel, I've set up a travel blog which I'm truly in love with. To be honest, I love writing that blog at the moment and since I've been working 5 days a week and don't wear make up to work, the whole beauty and fashion thing in my life has just disappeared. (I did buy a Real Techniques sponge though, and it has changed my life.)

I've been spending free time exploring other travel blogs, gathering ideas, creating plans, spending money, working out budgets, planning visas... The list goes on and on and on... But at the moment it's something I truly love to do and I just can't wait to be in all of these amazing places. As a result of this though, this blog has taken a back seat and I don't feel the urge to sit down and type out a post.

However, on my travel blog I've been scrawling out posts on each of our destinations and our flights and as I book my visas and begin to consider what I should take on a 4 month trip to Southeast Asia there will be posts about that as well. So if you're interested in following my plans and adventures then here is where to find me.
Posted by Unknown at 06:30 No comments:

FALLING IN LOVE WITH BUDAPEST / PART 1

My mum bought my boyfriend and I plane tickets to a city of our choice for my birthday back in May. I had mentioned many times that I wanted to go to Budapest so we went ahead and booked it. I read how cheap Budapest is as a weekend break and as I looked further into it I wanted to go there more and more, although I'm not sure what specifically attracted me to it. After my trip I am completely in love with it and want to back again next year and one day take my mum.

After a 2am start we decided to drop off our bags at the hotel and wonder about town. We stayed at the Roombach Hotel Budapest Center which was 5 minues walk from ruin bars, parks and all he main shops. The hotel had been newly done and was very modern inside. The foyer was colourful with modern copper twists and the bedrooms had wallpaper covered in words in a typewriter-like print. My mum and I found this after searching all over the internet and I'm so glad we found it. The woman at the desk was also super helpful and I would definitely consider staying there again if I were to go back.

We headed down to the river which seemed to be the best place to get our bearings. We were able to see all the landmarks and were then able to work out how far away everything was from each other while we were both still half asleep. This is when we realized how small the city was.

Hunger was the next thing that kicked in. We didn't quite know where to go to eat and after walking past a couple which looked not very appealing or on the more expensive side we consulted the guide book we had. I wouldn't normally do this but I simply was just too hungry to try to find internet in order to look anywhere up. It directed us to Ötkert, a little ruin bar past Chain Bridge, heading towards the parliament building. Here I had the best burger I had all week. It was on the more expensive side, although I put that down to the tourist appeal of ruin pubs. 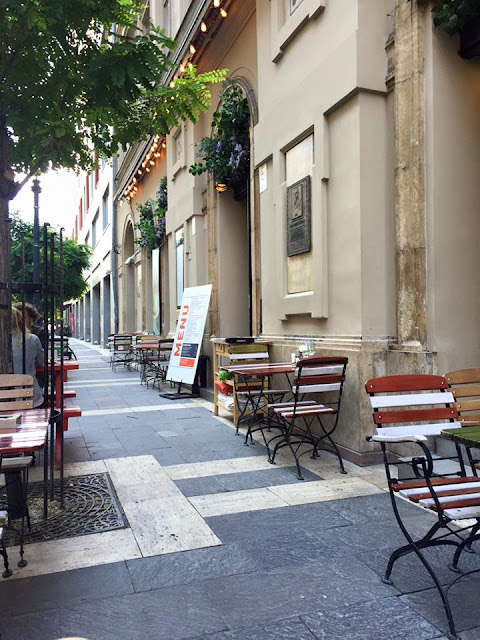 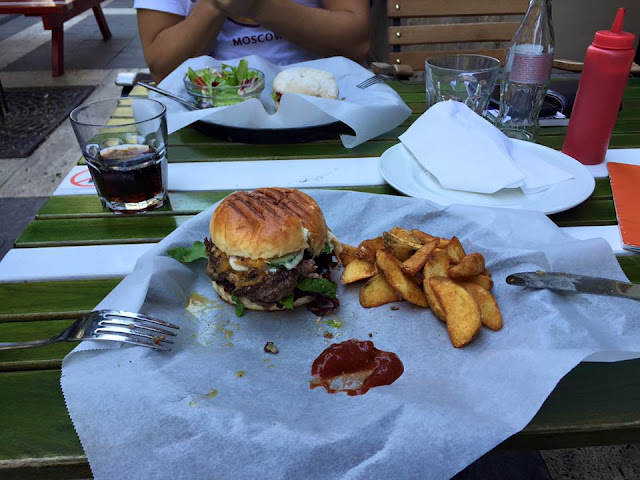 As it was such a nice day we decided that we would sit outside although the inside was really unique and beautiful with a covered courtyard in the centre. All ruin pubs have their own unique styles and vibes but it is common for them to have some kind of courtyard in the middle which is usually open air. 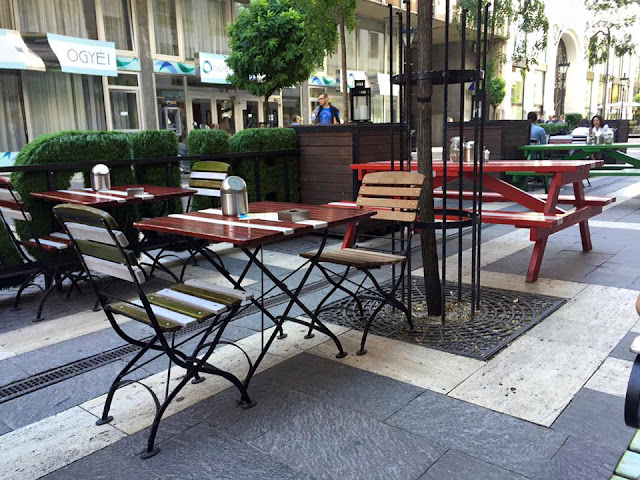 Right at the end of the road (another reason we sat outside) was St Michael's Basilica. We headed inside to look at the beautiful interiors... 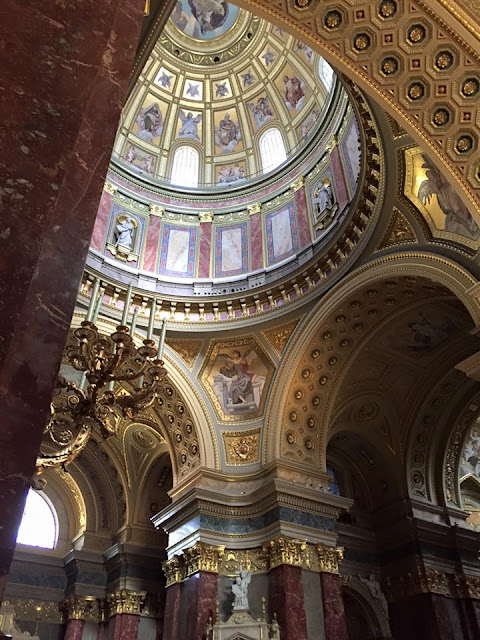 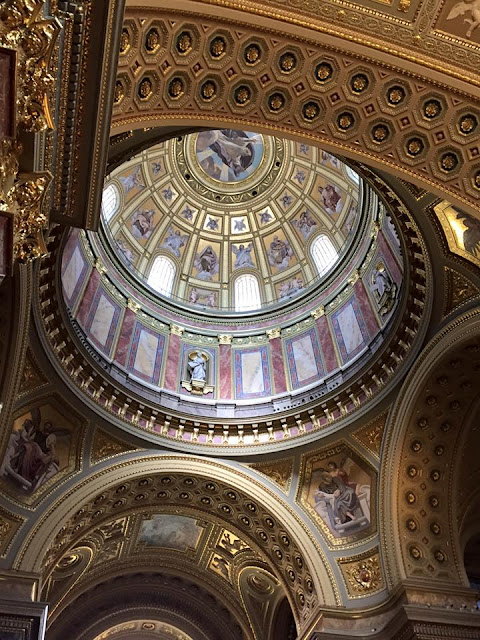 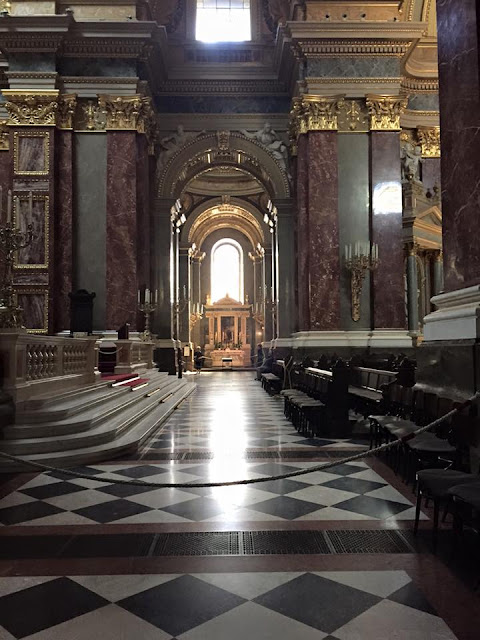 And to get a panoramic view of the whole city... 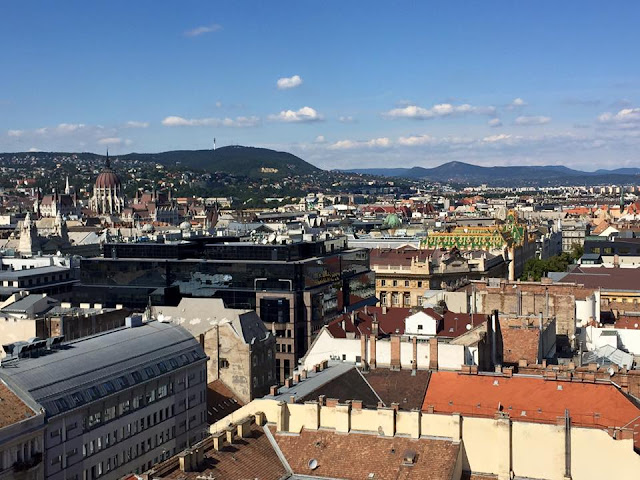 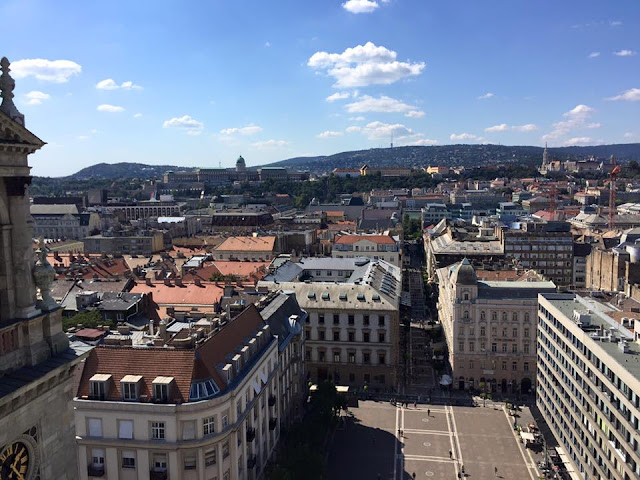 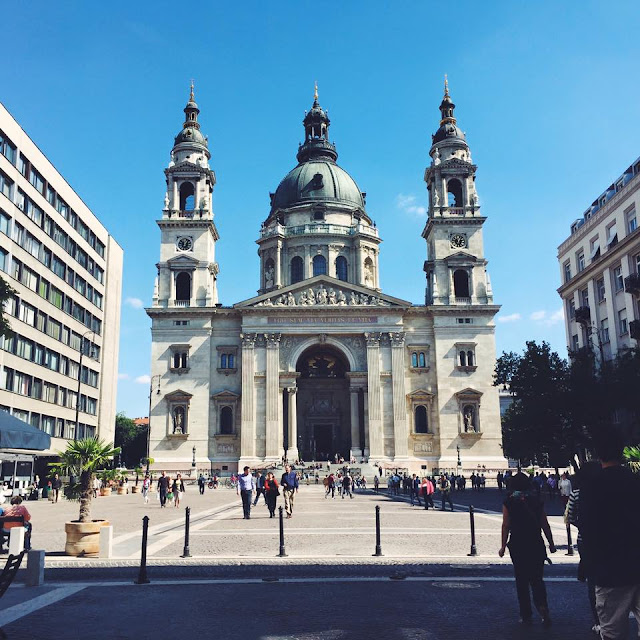 After this we headed back to our hotel to check in and had a nap since we were both exhausted from our early start. We then prepped ourselves for dinner and looked on LikeALocal where we found Jelen Bistro, a place known for it's great Thai food that also had a bar for a drink before dinner and a fair amount of outside seating all along the pavement. We both absolutely loved this place and it was a great way to ease ourselves into the quirks that bars and restaurants in Budapest all possess. 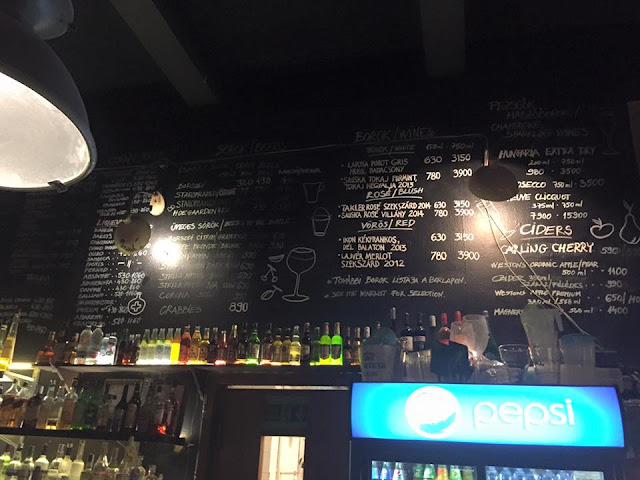 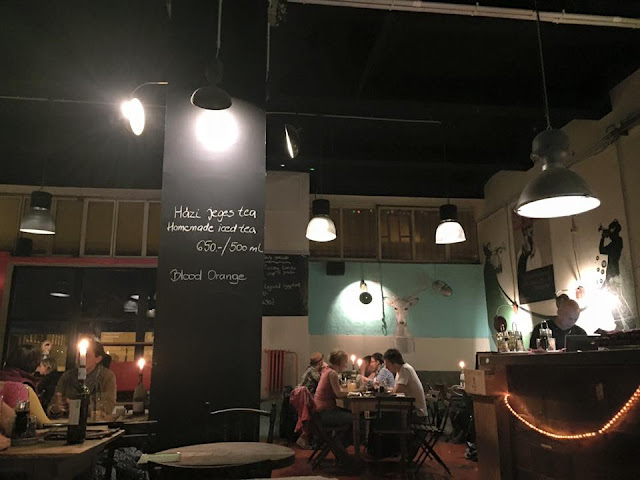 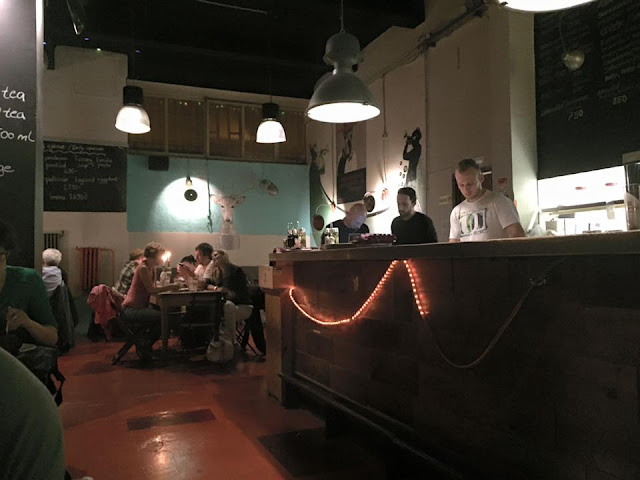 The most amusing thing we noticed was that something like a vodka and coke was never on the menu and the people serving us rarely knew what we were asking for... So they bought me a glass of coke and a double shot of vodka. It is much cheaper to drink beer and wine in Budapest and Will sampled the beer in every bar and restaurant we visited. A pint and a vodka and coke was between £4-5. 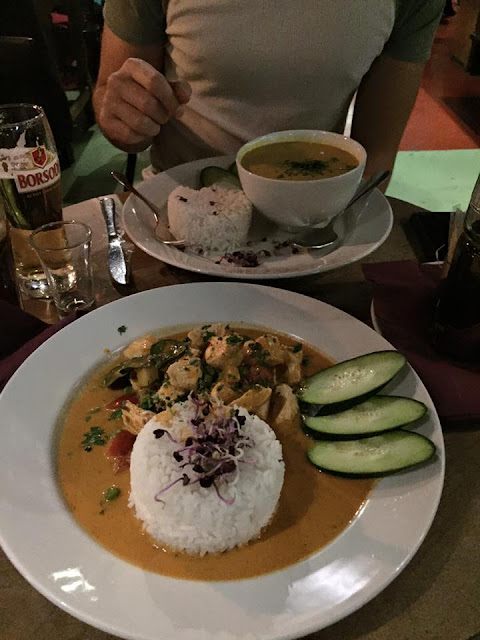 After dinner we decided to walk along the river to see the city lit and it was still fairly early. However exhaustion got the better of us and we headed back early so that we would be ready for breakfast (included at the hotel) and could head out to the thermal baths... 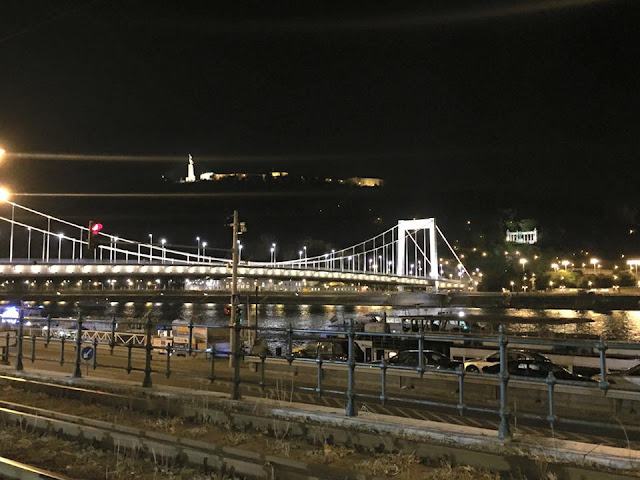 ...For four months! I was going to write about it on here but I have actually created an all-new travel blog here which we are currently sharing our route on (as of tomorrow). Please go have a look if you want to see what I'm up to in the run up to my travels and then follow me around Asia (metaphorically, of course). 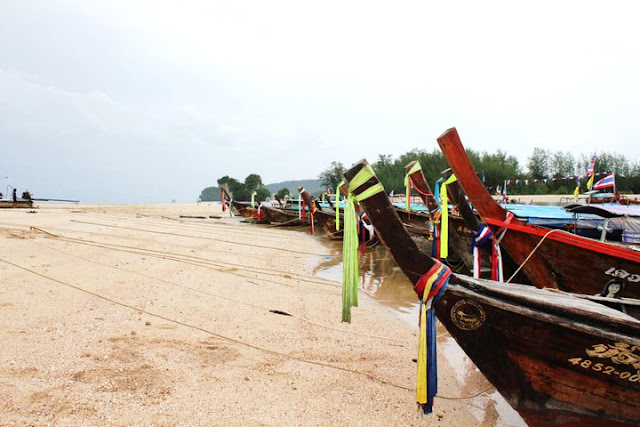 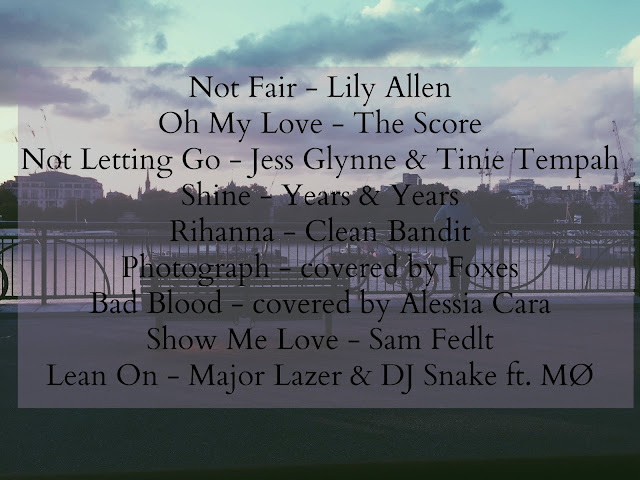 Not Fair by Lily Allen is one of my favourite songs at the moment since I watched back the set from Benicassim from last year (post here). I'm not actually a big music listener at the moment which is strange but when I do put something on in the shower or on my walk to work these tend to be what I'm listening to!
Posted by Unknown at 18:00 No comments:

For my lovely best friend's birthday I thought she deserved a lovely treat so months in advance I formed a plan. This plan was unavailable to put into action 30 days prior to the treat itself but when the time came Ice Bar, London was booked. 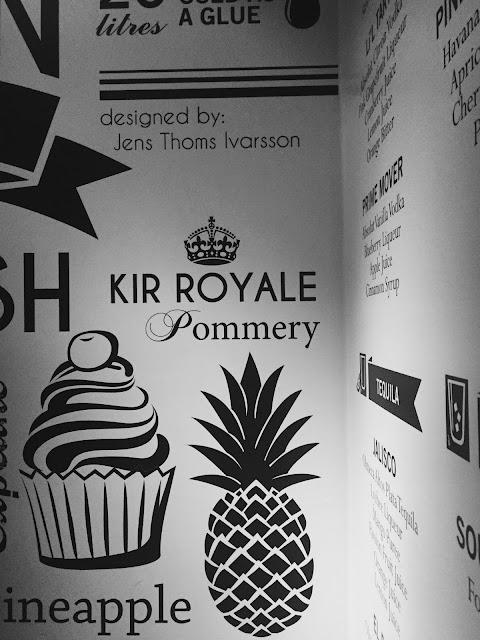 Ice bar had a great selection of some of my favourite cocktails as well as ones I haven't heard of. I stuck to vodka as tequila has funny effects on me and the mojito's were delicious! In the square cups made of ice they were super cold and, although it is a little gimmicky you are paying for the great experience that we had! As you drink your glass melts away from your mouth which was weird but kind of cool, too. Just don't drop your glass as it's £4 for a replacement... and I guess that isn't including the drink! 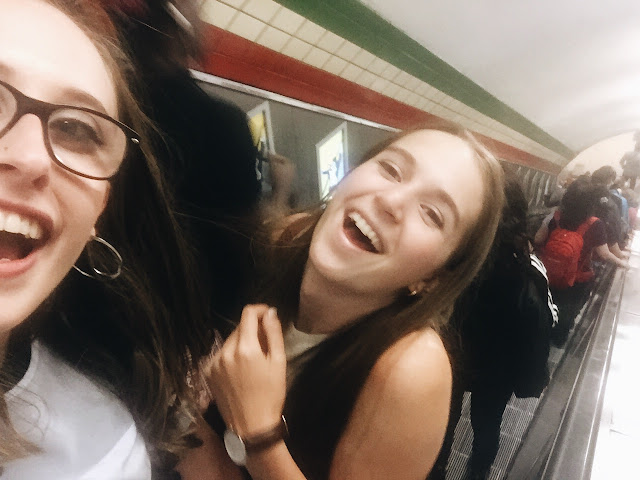 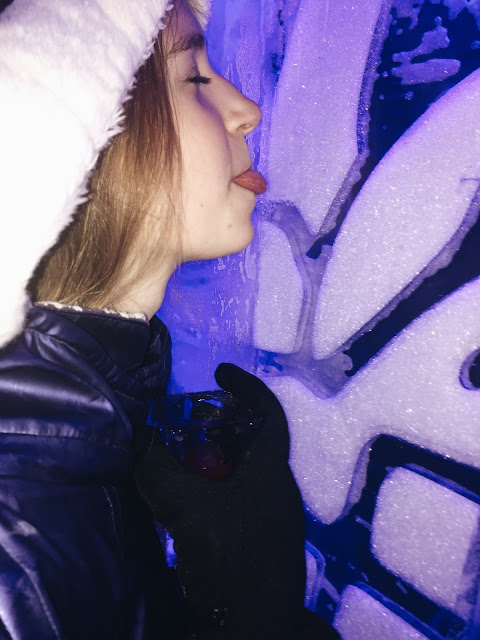 Even the walls are made of ice... Yes, other people were licking them and yes, that's kind of gross. 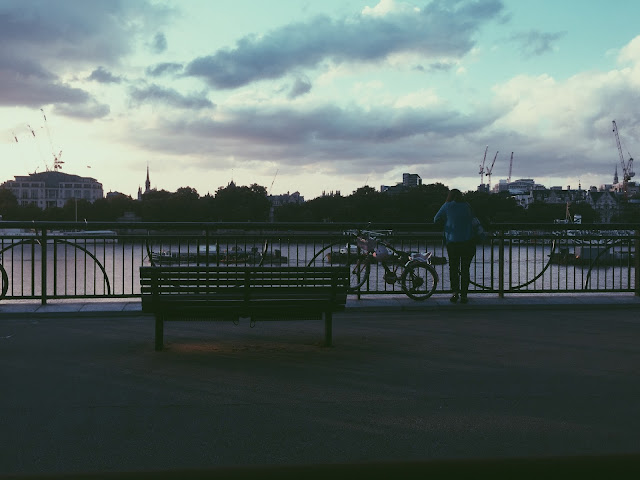 Dinner with a beautiful view by the Thames! St Pauls was just to the right which is my favourite building in London and although the sunset in London is not like that on the beach but it was pretty beautiful. We had dinner at Gormet Pizza Company on South Bank and it was delicious! Would recommend if you want somewhere not too expensive and super quick! We were seated immediately at 7:15pm on a Friday! 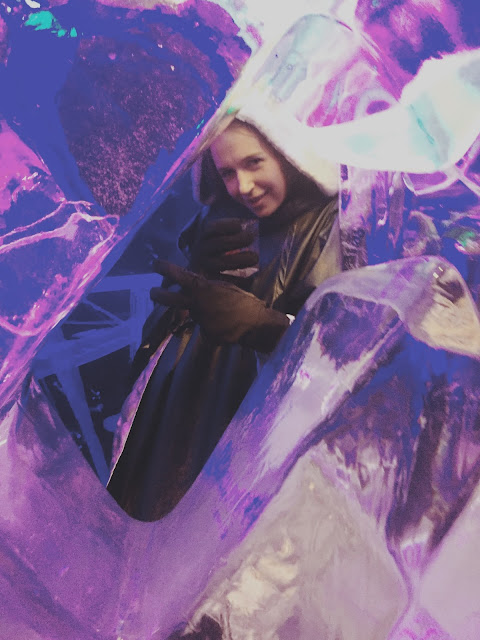 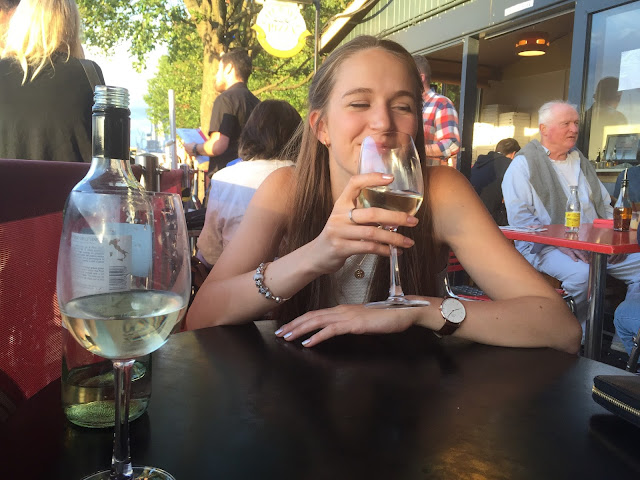 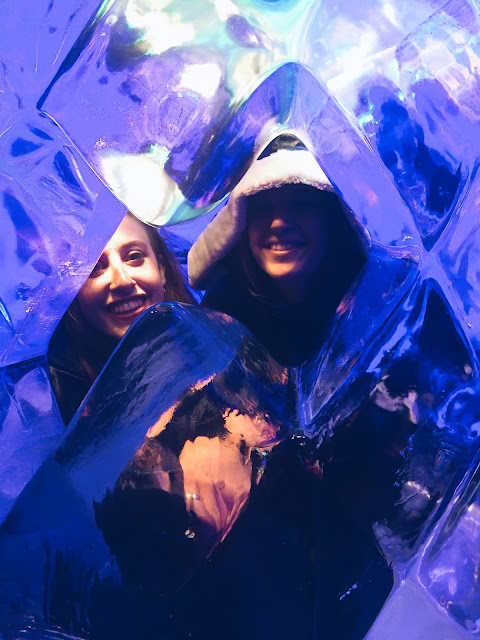 In a giant pineapple made of ice and quite happy about it. Thanks to the guy who took this photo after I passed my phone to him out of the little peep hole. 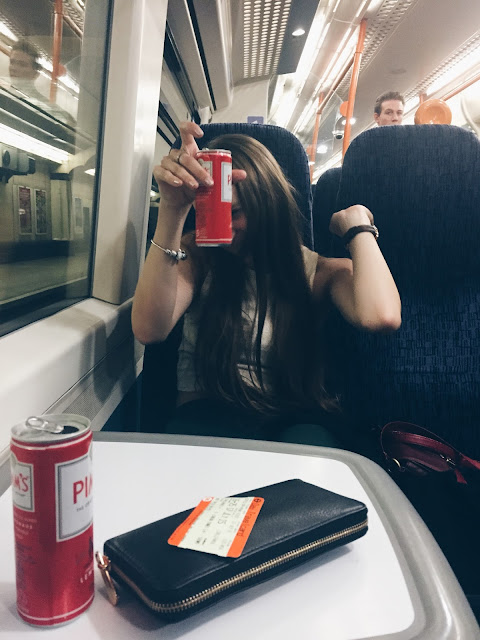 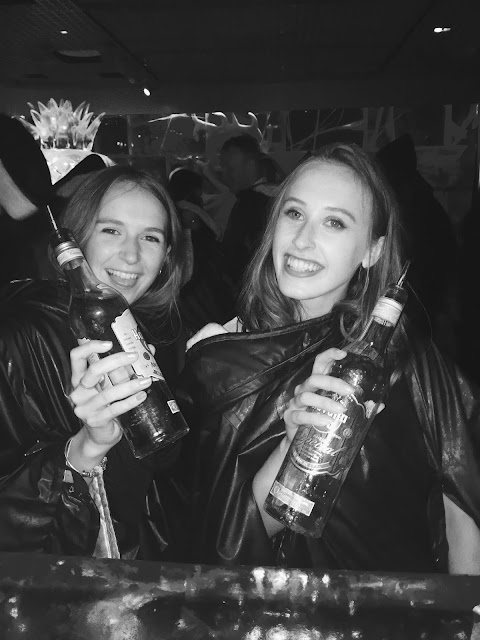 These bottles were absolutely freezing! Thanks to the lovely barman... who gave us free shots. 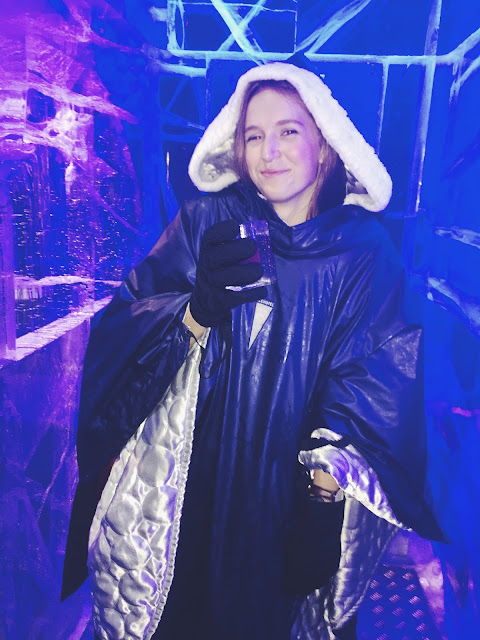 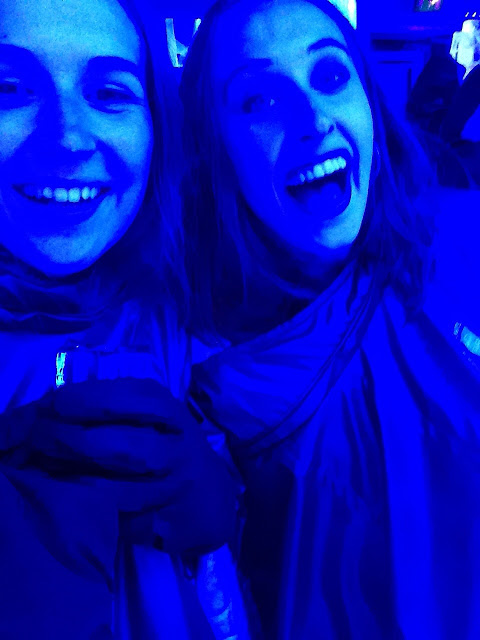 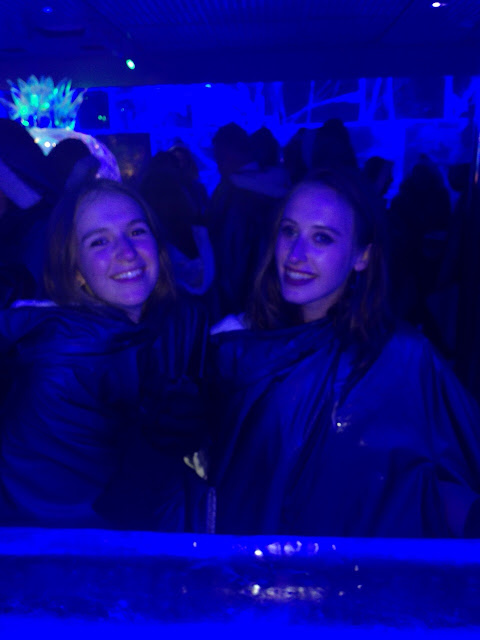 I'm so glad I booked this for us and honestly Ice Bar had some of the best customer service ever since I originally booked for 4 but had to cancel two of the people as they were sick and couldn't make it. Rather than saying it was too late they offered me either a full refund of the tickets or two refills per person missing. Obviously I opted for refills(!) which meant we had 3 drinks each! Definitely something great to do if you're visiting London or wanting to celebrate something special and the Gormet Pizza Company on South Bank (walk towards St Pauls/TATE) was a great place to have dinner on such a warm evening as it gave us a beautiful view and amazing food at a reasonable price considering it's London. I also thought their service was great. Happy Birthday Jojo!
Posted by Unknown at 11:00 No comments:

I've fallen for the copper trend. Normally I wouldn't be such a magpie to such a trend since I see no real point in spending a great deal of money on homeware type items since I am 18, living at home and not exactly in the position to spend money on such, honestly, useless items. However, we have been moving house for the past year and while we have waited for the house to be built I have become increasingly more obsessed with planning every single detail of my new bedroom. Also, H&M is super cheap and they are very accommodating to my grey, white and copper needs. And I love their marble trend, too.

I've been spotting things again... and ordering them. I really liked my quick little 'SPOTTED:' post I did about the River Island Cami Bikini Tops (here) and I thought I would post this gem I spotted in the Zara sale... £50ish to £22.99 is my kind of bargain. I love the subtle two-tone and I have been searching for a bag for ages with a zip, a hand and shoulder strap and handy compartments. This ticks all boxes but has proven very difficult to find! Preferably I wanted black but this caught my eye and was too pretty to click away. For the price, practicality and prettiness, I just couldn't leave it alone.

I am travelling a lot in the next two months as well and the size means I will be able to get in lots of travel essentials and although it's not quite big enough to use as a hand luggage bag when you have nothing else, such as a bag in the hold, it will fit inside my suitcase and I can fill it with travel essentials! I'll be posting soon something along the travel essentials line, so stay tuned. 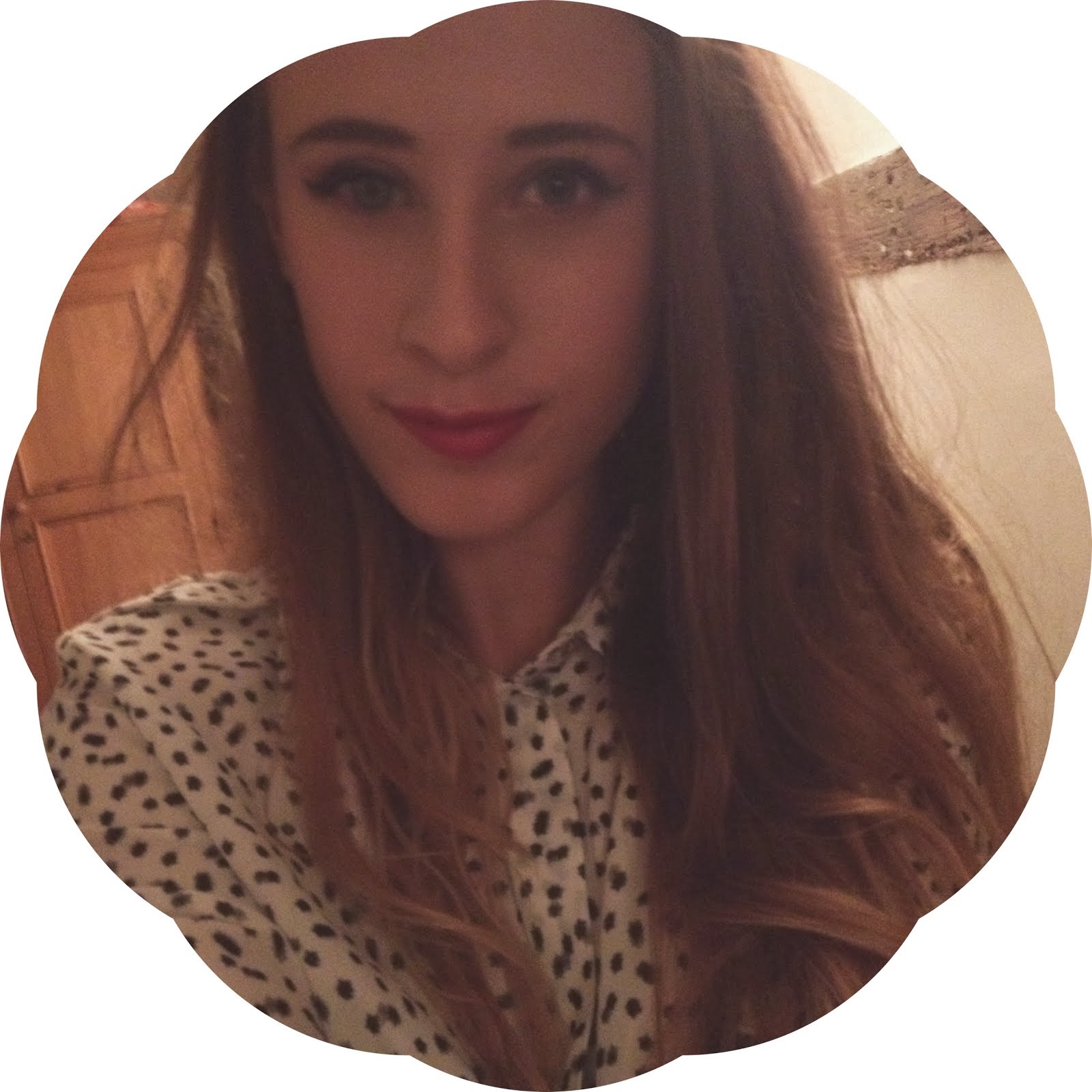